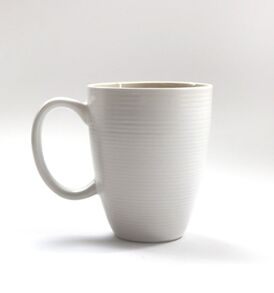 Image by JWDenson
Consider a typical coffee cup sitting on a table: in looking at it, what do we actually know about the cup without resorting to thought or concept?  For those of us who speak English, and who have seen one before, we will certainly know it is a “cup” - that label naturally and immediately arises, as does the knowledge that we can drink from it.  However, do we know anything else?

A Buddhist might first reflect as to whether the cup is permanent or impermanent; however, can we know that by looking at it?  While we might think about how it was made from certain materials, can break, and will one day no longer be a cup, is it visibly changing or degrading right now?  Or, is its eventual demise just an abstract thought?  Similarly, is there anything we actually see that proves the opposite, namely that the cup is permanent?  All we can say, without resorting to speculation, thought or concept is that, in an everyday sense, it is a coffee cup.  To awaken, however, rather than exploring the concept of “impermanence”, we must instead see that there is no aspect of our experience, such as the seeing of a coffee cup, that was ever internal to or owned by us: that was the original meaning of the Pali word anicca, typically translated as “impermanent”.

A Buddhist might also reflect on whether there is any essence or substance to the cup, a certain “cup-ness” that makes it what it is; however, can that be known in direct experience either?  Is there something we can actually see, by which we can definitively say either way?  Or, is that too a matter of thought and concept, and perhaps only as a result of applying the previous concept of “impermanence” to say that it cannot be substantial?  To awaken, however, rather than exploring the concept of “insubstantiality” of all we perceive, we must instead see that there is no “me” whatsoever, and no “me-ness” that makes me who or what “I am”.  After we see this, the nature of all else will naturally be revealed as well.

Finally, a Buddhist might reflect on whether or not the cup is a potential source of satisfaction and joy, or of dissatisfaction and suffering.  They might offer that something impermanent and insubstantial cannot possibly always be pleasing to us; that too, however, is the product of thought and concept.  What we directly and simply see is a cup, an experience that does not inherently lead to joy or suffering.  To awaken, rather than exploring the concept of how other things and people ostensibly cause suffering, we must instead see that the unrealistic expectation that life will always go our way is the reason we suffer.

Reflecting on impermanence, insubstantiality and unsatisfactoriness as characteristics of all that exists is featured in, if not central to, many approaches to the Buddhist path.  However, if we look at these terms closely, whether with a coffee cup or anything else, what (if anything) do they actually describe in terms of what we directly see and know?

What follows is an exploration of using these three terms not as characteristics of what everything is, but instead as reminders of what we assume is the case but is not.  In particular, they remind us that (1) there is nothing that is internal to us, (2) there is no “me” in experience, and (3) things don’t always go as we prefer.  This is not only what we can directly see and know, but also corresponds to the experience of awakening. ​
Characteristics, or Reminders? ⇒