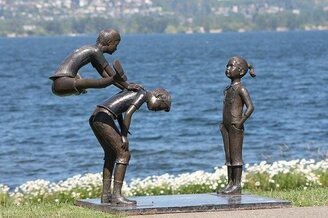 ​The first time I heard the word awakening, I was quite intrigued: I wanted to know what it was, and of course wanted “it”.  As a result, for over 20 years I regularly studied, meditated, bowed, and otherwise pursued awakening.  At some point, though, I realized that it wasn’t enough, in that nothing significant was changing or happening.  The struggles I had in life, and the frustration, fear and longing that went with those struggles, seemed destined to always be there.  I sensed there was something that the word “awakening” was pointing to, but didn’t know a way to access it, nor did I know what “it” would look like if I found it.
​
I finally gained a foothold one day while meditating, when I thought to look for the “self” that was meditating.  It felt as though my "self" was both doing and experiencing that meditating.  To my surprise, looking for a "self" was much more straightforward than I thought it would be.  Many other things were seen (and heard, felt, etc.), such as thoughts about breakfast, memories about what had happened the day before, noises in the room, discomfort in my body: all that was definitely there.  And my mind was quiet enough that, if there was a “self”, I surely would find it - it had nowhere to hide.  After perhaps 10-15 minutes of looking everywhere, but not finding what it, it finally sunk in: there wasn’t such a “self”!  Immediately, there was what might be called a paradigm shift: the belief in there being an doer or experiencer was gone, because I had seen clearly enough that there actually was no such thing.  Among all that was seen, there was simply no “self”.

After reading some traditional Buddhist texts that address this, it was clear that I had seen through the initial belief along the spiritual path, the view that the sum total of all that I considered to be “me” meant that there was an actual “self” that went by my name and controlled all that.  The texts also stated that this was really just the tip of the iceberg, in that there was a list of 10 such beliefs as to what and who I was, such as there being something called “desire” that influenced how I responded and reacted to the world around me.  In other words, as significant as this first shift was, it was merely the beginning: there were several more beliefs about “me” that were lurking underneath.

Since those remaining beliefs were not described very clearly in the texts, over the next 3 years or so I experimented and searched until I realized what each item on the list was getting at, as evidenced by there being yet another paradigm shift and another substantial belief falling away.  At each step it became clear what the belief was, and how convincing that belief had been until I saw that it wasn’t true.  And in order to drop each belief, I simply looked for what I believed I had or was and, among all that was seen, conclusively saw that a particular form of “me” or “mine” wasn’t actually there.  Instead, in the seen, there was simply the seen.

Eventually, all sense of “me” fell away, as well as the beliefs that led to a sense of “me”, and I reached the end of the list.  It was while walking to work one morning that the final belief, having to do with the unrealistic expectation that what happens should be reliable and predictable, finally fell away.  I immediately knew that there wasn’t anything more I had to see or see through because, for the first time in my life, there was nothing wrong with what was happening.  As a result, the struggles I had with life, and the frustration, fear and longing I assumed would be my lifetime companions, suddenly disappeared.  In other words, there was no longer any suffering, regardless of what was happening.

Awakening is the End of Suffering

Prior to awakening, the world in and around us can be a difficult place to inhabit.  While there may be times when things go well, there are inevitably times when things don’t, by which we suffer.  Suffering can take many forms, such as feeling anxious, angry, fearful, frustrated, envious, impatient, distressed and many, many others.  And underneath that suffering is what might be described as the sense that something simply isn’t quite right, and therefore needs to be resisted.

One way the Buddhist tradition describes this mismatch between what we want and what we actually have is in terms of what are called first and second “darts” that hit us.  The first darts represent how we naturally and inevitably feel, at the level of basic physical sensation, when things don’t go as we would prefer.  For example, if someone is criticizing us, or we long for someone or something we don’t have, there may be a subtle yet uncomfortable feeling in the heart or pit of our stomach - it can feel as if a small dart has just hit us there.  Or, if we hit our thumb with a hammer, some very obvious and painful sensations are the natural result!

The question is, though: what do we do next?  Do we accept the fact that it doesn’t feel good that someone is criticizing us, that we don’t have who or what we want in our life, or that our thumb is starting to throb with pain?  Or, do we resist that fact, as if things could (or maybe even should) be different for us?

In the case of being criticized by someone, that resistance might take the form of tensing up, becoming fearful or angry, thinking about what to say and how to say it, and perhaps launching into a counter-offensive against the other person.  Similarly, we might spend a lot of time longing for a certain relationship or possession, or scream and yell about our poor thumb and perhaps how hardware manufacturers should design a better hammer(!).

While those sorts of reactions might feel like the right things to do at the time, they don’t really help: instead of feeling better, we will likely feel even worse.  Our whole body might be filled with even more uncomfortable sensations: those are the “second darts” we create, which we then react to even more, by which discomfort or physical pain turn into full-on physical and mental suffering.  In other words, there is what initially happens and how we basically feel about it, and then there are all of the follow-on thoughts and actions by which we can make an uncomfortable situation even worse.  While the first darts are inevitable, the second darts (by which the mental anguish and distress of suffering arises) are entirely optional.

Awakening, then, is realizing that we don’t have to resist what is simply happening, even though it isn’t to our liking.  If we drop all resistance to how we feel, as if it shouldn't be happening, not only will we be more able to engage with a certain situation, but also the anxiety, longing, anger, frustration, and all the rest will cease to arise, by which suffering will cease to arise as well.  If suffering no longer arises, that is the indicator that awakening is complete: whatever you did, it worked.

From this perspective, awakening and the end of suffering are one and the same.  Subjectively, awakening is realizing that there is no “me” whatsoever whose needs must be catered to, by which there is no longer anything wrong (or right) with what is happening here and now.  Though this is described here using ideas from the Buddhist tradition, awakening transcends path and tradition.  Whatever you call it, and however you “get there”, it results in the peace, happiness and freedom that everyone seeks.

What Awakening Is Not

Describing awakening is not easy: it really is something that has to be experienced first hand.  Also, it is generally a matter of what doesn’t occur, or what no longer occurs, than what does occur.  To the extent that there are preconceived ideas about how awakening can or will be described, that is perhaps the best place to start.

Such preconceived ideas likely come from the fact that, prior to awakening, what we anticipate “it” will be is influenced by what we want it to be, because there is a “me” that wants to be part of it.  I for one had many such preconceived ideas and expectations, almost all of which turned out to be well off the mark.  The list below summarizes what I believe are some of the more common misconceptions about awakening: