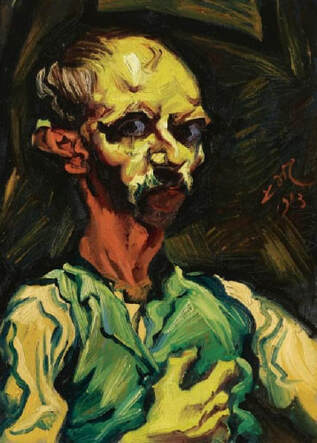 Ludwig Meidner
​The 2nd fetter, translated as doubt and perplexity, is how it is we manage to be presented with the truth about ourselves and the world around us but are not able to take it in.  With the establishment of this fetter, that we exist as a separate and unique being is now a foregone conclusion, and a completely plausible explanation of what is happening in experience and why.  It might be said that here we put in place the final brick of the foundation for living life as if the existence of a separate “self” really were true.

With the 3rd fetter firmly in place as to what our life does or should consist of, whether that be our daily rituals or what “spiritual practice” necessarily looks like for us, with the 2nd fetter we are able to distance ourselves from the alternatives.  We can now reference our own impressive stockpile of likes and dislikes and how we go about navigating life with those, and either get perplexed about the mismatch with what spiritual teachings offer and in fact be skeptical of them, particularly if they say we don't exist as we believe we do. We have concluded what “reality” is, and that we can be independent players in that reality.  It might be said that we are no longer receptive to what is actually true.

The 2nd fetter is thus the self-referent illusion that there is something about us, a doubting/perplexity ability or mechanism, by which when we are exposed to the truth, rather than taking that in we can resist or deflect it.  For example, take a moment to reflect on how many times you have heard that there is no separate self; that is true, and yet were you simply able to take that in, or was it as if there was a part of you that was able to keep it at bay, by which it couldn’t sink in?  It can feel as if we can somehow resist or deflect the truth, because we have some faculty of deflection or defiance that comes into play.

It might also feel as though we’ve drawn a line in the sand between what is true and what is not, at least as far as we are concerned.  In essence, we have developed a defense mechanism for those times (perhaps thousands of times per day) when life indicates we might be wrong about ourselves and the world around us, for example in assuming that we can find permanence, satisfactoriness or substance in what is happening.  It is as if our armor has been donned: we can now rationalize most any view that we have.  All that remains as the 1st fetter is to draw a dotted line around all that we have attached to and call it “myself”.

The 2nd fetter traditionally falls away when we see through the illusion of the “self” at the 1st fetter, because there is no longer a self as a set of views to defend, thus the armor can be seen as pointless.  Put another way, when the separate "self" is seen to be a concept, this layer of conceptualization cannot hold its ground either.   As a result, inquiring directly into the 2nd fetter and "breaking" it is not typically done, and what this fetter is might only be clear in retrospect.  However, looking at how we defend and deflect when it comes to inquiring into whether we are what we think we are is nevertheless valuable.
​
​Links