The Illusion of Perception
​
The 7th fetter is the belief that we have the basic perceptual infrastructure that perceives ourselves and the world around us, by which it seems that everything is as real as we believe it to be.  As we look around, we might notice our bodies, others sitting in the room, a book on the table - all of it can seem to be an actual "something" that inherently exists, and is waiting for us to perceive it as it were.  For example, the book can appear to have a certain "book-ness" to it and makes it what it really is.  Even our thoughts can seem to have a certain existence, because we assume that we have something called "perception" which perceives them. 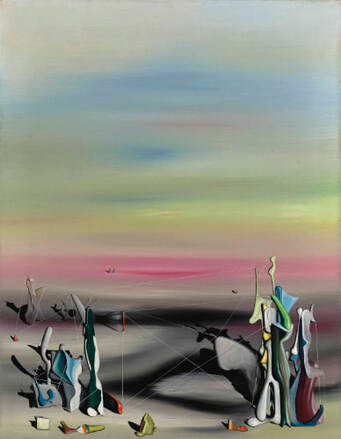 Yves Tanguy
The traditional term for this fetter focuses on our insistence that arupa is real.  The Pali term arupa is typically translated as “formless”, which may or may not be a particularly helpful term.  If instead we see arupa  as “what’s left” after we stop believing in subject/object duality (i.e., when our belief in objective form or rupa falls away with the 6th fetter), we can get nearer to what this 7th fetter is all about.

One way of describing “what’s left” after the 6th fetter disappears is that there are still the notions of actual space (and time) in which we believe that we and other things exist, consciousness which discerns particular aspects of everything such as their shape and color, and ‘somethingness’ or substance which everything has by which they “are what they are”.  These three aspects of experience are so convincing because, underneath them, we assume that we have something called "perception" that detects or recognizes those actual somethings; that assumption is the underlying illusion here.  Even though we may no longer experience things as objective forms that exist in relationship to us (which was the focus of the 6th fetter), we continue to believe that things nevertheless exist in an inherent and independent way.

For example, when we recognize “a book on the table over there” or “a thought about tonight’s dinner”, we tend to assume that there is something that really exists which corresponds to those words.  This is of course not to say that we shouldn’t use words, or that once we get past this fetter we won’t be able to get through daily life because we no longer recognize what anything is.  Instead, we come to realize how what is conventionally called a “book” or “thought” is just that: a convention, rather than something that truly exists because it has a certain “book-ness” or “thought-ness” to it.  If we can get rid of the belief that there is something about us that perceives actual things, or could even do so, we will stop assuming that there are actual or existing things in general.

As with the 6th fetter, the 7th fetter is sometimes assumed to be a matter of becoming attached to certain meditative states, in this case the four formless states or spheres (in the Pali language, arūpa jhāna).  These meditative states are what naturally remains after we temporarily set aside the mental fabrications that give rise to the notions of space, consciousness, “thingness” and the very act of perception itself.  These states can be quite pleasant, and even fascinating, thus they are easy to grasp at.  However, being attached to these temporary experiences is not the fetter here: instead, that they are experienced at all is a symptom of the underlying belief that we perceive actual "somethings", by which there are this and other s beliefs to temporarily set aside.

Examining these four meditative states, in reverse order, can help illustrate what this fetter is all about.  If the the 8th fetter that “I Am” or “I Exist” is in place, we naturally want to be able to point to something else that is “not me” in order to affirm that we exist.  To do this, our fundamental assumption (and the actual fetter here) is that we have something called “perception” by which we can possibly perceive or detect other existing things, a “thing detector” if you will.  Next, we assume that there are actual things here and there which we can perceive or detect, and which are as real as we are; in other words, we believe that "somethingness" is real.  We then suppose there is an entire system of consciousness (such as an “eye consciousness” and its associated infrastructure) by which we see or discern a particular thing, an “ear consciousness” by which we hear particular sounds and so forth; it is with this apparatus by which we identify what exactly the thing we perceive actually is.  Finally, we mentally create the notion of “space”, which we assume is finite and even measurable, as the context within all these real things exist.

When we quiet our minds in meditation, these four layers of assumption “peel off” in the reverse order to which they were created.  We first see that space isn’t actually a finite quantity or entity, and it can be rather disorienting when, even as a temporary meditative ‘state’, we suddenly experience ourselves as floating about with no spatial reference.  The next step is to further relax our mental interpreting by which we see that “consciousness” is not finite either: there really isn’t a discernible eye consciousness, hearing consciousness, etc. that perceives actual shapes and colors, sounds or anything else.  In the third meditative “state”, the very notion of "thingness" or “somethingness” falls away, by which we no longer assume that there are any inherent divisions or boundaries that any particular “thing” might have.  Finally, in the fourth stage, we experience first-hand that there is no faculty or ability called perception, a “thing detector” or anything else that could allow us to recognize a particular something in the first place.

In terms of inquiry, the belief that there is a faculty or ability called perception that we have is the illusion to dispel.  If we definitively see that there is in fact no ability or faculty we have which might allow us to perceive “real things”, we no longer believe there are actual things.  This shift can occur in day-to-day level of awareness, or it may be helpful to work within the arupa or formless meditation stages.

Once this shift happens, and the 7th fetter is gone, it no longer seems as though we live in a world of actual or existing "somethings".  We will still recognize “things” in a conventional way - it's not as though we suddenly become unable to navigate daily life.  However, the versions of those "things" that remain are quite different than the previous versions which we invested with substance and reality.  The world becomes one of images and appearances, and is now obviously a mental interpretation of what we see, hear or think.  We can still use the word “perceive” in a conventional way, but we no longer assume that there is an actual faculty or ability called perception which perceives “real things.  For example, we can go to the doctor’s office and talk about what is wrong with our body, but without having the experience of an actual or “real” body.

I liken it to being able to talk about a character in a movie who has certain features or characteristics, and being able to talk to others who saw the movie about that character, even though no one in the conversation believes they are talking about an actual person.  We thus never stop knowing how to interpret experience, which skill we have learned over the course of our lives: the correct label for “red stoplight” and “best friend from school” will always be available.  However, after this fetter falls, we no longer believe there is anything except interpretive images and appearances happening, including (and especially) when it comes to “mind", "body" or anything else we once presumed we had and made us who we are.

As a result of no longer believing there are actual “things” which exist, nor space in which anything could exist, life looks very different, and at first can be a bit shocking or even alarming.  Once this becomes the “new normal”, though, we get used to no longer believing we live in a tangible, “real” world.  Experience doesn't go blank, nor does what we see squish together into an unrecognizable mess.  Rather, we come to understand that our mental interpretations such as “a book on the table over there” or “a thought about tonight’s dinner” are just that: interpretations, just as they always have been.  Life goes on just fine without the added layer of “somethingness” being superimposed onto everything.

A side-effect of this shift is that, because our belief in all perceptual infrastructure has fallen away, we can no longer access the formless state or spheres as a meditative “state”, because there are no corresponding beliefs to temporarily set aside.  For example, rather than temporarily getting into a temporary state where there is no such thing as finite space, we can simply and immediately notice this fact.

Another side effect is that, without the notion of space (or time) in which "things" rise and fall, the concept of impermanence no longer makes any sense.  Rather than waking up to something like impermanence, we wake up from the belief in impermanence as the mutually-defined opposite of the permanence we wish we could have or find.  More generally, the illusion that any concept could have an element of truth falls away at this juncture, in that while concepts arise just as they always have, they are no longer assumed to point to anything real or true.

Elsewhere in the Buddhist tradition, the seventh Mahayana stage (bhumi) is typically translated as “going (far) away”, and leaving behind all previous notions of what and who is real and happening.  If one reads the so-called "Perfection of Wisdom" canonical literature which describes the bhumis, the description of the experience of the seventh bhumi is exactly that of the seventh fetter.  Thus, it is here that these two “path descriptions”, the fetters and the bhumis, more closely and obviously converge.  Among other things, we can now more fully understand the vow of the beginner who aspires to fully awaken (a bodhisattva), where one commits to help all beings awaken even though there are no “beings” to help.  Though an enigmatic undertaking at first, this vow no longer has any cognitive dissonance: “as things don’t exist, so they exist” becomes a more or less accurate description of what is simply happening.
​ ​
​Links