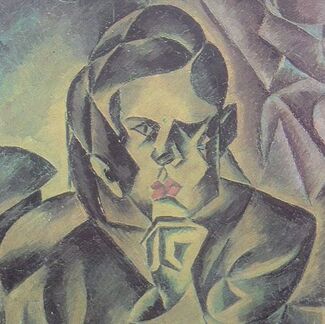 Bohumil Kubista
The 8th fetter is the most fundamental way in which we identify with experience, or perhaps better, identify as experience.  It might be supposed that once the 7th fetter is gone, and all sense of “mind” and “body” fall away, there would be no sense of “I” or “me” either.  However, the notion that “I Am” or “I Exist” is so fundamental, and so persistent, that it doesn’t need to be connected to or proven by a mind, body or anything else.  This belief has survived the disappearance of the notion of a separate ‘self’, the push and pull of desire and ill will and all the rest, and likely remains just as firmly established as it always was.  However, now that everything else is stripped away, it starts to stick out like a sore thumb, and is accessible enough that we can explore whether or not the idea that “I Am” or “I Exist” is true.

While the original Pāli term for this fetter (asmi-mana) is sometimes translated as ‘the conceit of me’, by which we compare ourselves to others, at this point there is no longer any sense of an “other” to which we could compare ourselves.  It is more the residual yet fundamental notion (mana) that there is a “me” that exists at all, by which we ever could have compared ourselves to anyone else.  A better translation of the term might thus be “misinterpretation as me” or “the idea of me”.  One way of looking at this fetter is that, if the restlessness of the 9th fetter is in place, we look for a place to land as it were, and the most fundamental landing spot is a “me”.  In other words, rather than the 8th fetter being about arrogantly comparing yourself to anyone else, it is mistakenly inferring or believing that there is anyone “here” to begin with.

With the first seven fetters out of the way, the sense that “I Exist” is by this point no longer tangible: there is nothing we can point to and say “I am that”.  However, the belief that there is nevertheless a “me” or “I” is so strong that it doesn’t need any tangible proof.  In looking back to the first fetter, the sense of a separate entity called a ‘self’ was likely quite tangible, therefore was something that we could look for.  Here, however, we are looking at the subtlest self-view of all, wherein it can feel like there is a filter or screen of some sort by which we selectively browse experience and pick out that which is or isn't “me”.  It is that filter or screen that is searched for as part of a direct inquiry approach.

When this fetter breaks, all boundaries forever disappear, particularly the separation of “inner” and “outer”, which separation was a key aspect of concluding that there is a “me” in the first place.  At that point, rather than the sense of “me” experiencing what is happening, there is simply experience happening.  Rather than “I am everything”, it’s just “everything”.  Once all perceived boundaries fall away, it’s not like others will be able to read our minds or hear our thoughts; rather, that others are unable to do that will no longer be misinterpreted as meaning there is a “me” of some sort.

While first-person pronouns such as “I” or “me” will still be usable in everyday conversation, they will no longer have any resonance or meaning in terms of describing what is happening: self-identification finally and completely falls away.  Also, since there is no longer a boundary between inner and outer, meditation can no longer be described as the process of introspection and “looking within”, because there is no longer the sense of an “in here” where such meditation can look.  Instead, it might be said that "meditation is simply a quieter version of daily experience.

Without having to try to maintain or advocate for a “me” any longer, there can be a quite profound peace associated with this shift.  Rather than feeling interconnected with all beings, we simply no longer feel any disconnect, or barrier or resistance towards them, and we are able to move much more effortlessly through life.  Without a “me” in the way any longer, kind and compassionate acts have even less of an impediment, meaning that we can more easily respond to the needs of others.  Some might suppose that, if there is no longer any sense of “me”, then suffering must stop altogether, since there isn’t a “me” to suffer.  However, suffering does indeed continue here, albeit in a more fundamental way: this reveals that there doesn’t have to be (and never actually has been) a “me” by which suffering arises.

Perhaps like any process in which experiential changes occur, the shift that occurs here might be delightful and fascinating, and can also be uncomfortable and even rather frightening, particularly if there has been significant trauma in our life.  It might be said that the notion of “me” is the first line of defense against trauma, by which we attempt to manage, rationalize or otherwise cope with the trauma.  As a result, of all of the shifts associated with the fetters, it is when the eighth fetter falls that people may have difficult experiences, since unresolved trauma is no longer controlled or managed but spontaneously comes out.

Thus, an important caution: while my experience of this fetter was quite straightforward, some I have worked with or talked to have experienced profound energy rushes (sometimes called kundalini arisings), a revisiting of traumatic events of the past that suddenly hit them all at once, and other difficult experiences.  Just as you cannot re-believe in Santa Claus, there is no going back from here to a sense of “me” to help manage past trauma, and it is therefore advisable to seek professional help to address the underlying trauma to the extent possible ahead of time, by which the transition of the eighth fetter might be as smooth as possible.

In other Buddhist path descriptions, the eighth Mahayana stage (bhumi) is where we become “unmovable”, which can be seen as meaning that we have not just “gone away” from previous beliefs as the seventh bhumi, particularly around “me”, but that we can no longer be fooled into believing them again.  This underscores that the path is not about seeing “the way things really are”, but rather seeing “the way I really am not”.  This step also correlates to the end of the third Mahamudra yoga, that of the “one taste of emptiness”.  Here we clearly see that, without exception, experience is in fact empty of all things, even abstract things such as the notion of a “me”.
​  ​
Links