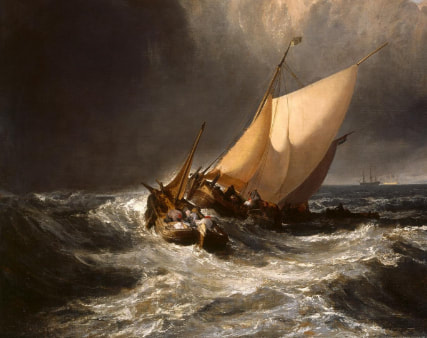 J.M.W. Turner
The 9th fetter is usually translated as “restlessness”, though it is not the restlessness we might experience during the day or while meditating.  Rather, it is the unsettling awareness that whatever assumptions we might have as to a supposed “nature of reality”, such as the notion that permanence, identity or control is somehow available an aspect of experience, are not true.  This is not a self-referent fetter, but the result of being spiritually ignorant in the first place, upon which we then built a “me” or a “self”.

From here, as we look back on the first 8 fetters, so many different illusions were manufactured, and all of them needed some sort of support or foundation.  How we provide that foundation is by assuming that whatever we are experiencing is somehow permanent, always satisfying and/or ultimately real or substantial.  Here, at the ninth fetter, now that there is no longer anything that could be described by such terms, we explore whether those characteristics of permanence, satisfactoriness and substance are even available.

Since qualities like permanence are not actually available, here we start to finally come to grips with that fact, and realize how we’ve been chasing an abstract idea (e.g., “permanence”) that we simply cannot find.  As a result of these unrealistic beliefs, there has always been a mismatch between what we believe we are experiencing (or will hopefully experience) and what is actually the case, and a natural response to that is one of restlessness and unease.  While we may have been at least subconsciously aware of this mismatch all these years, now that mismatch is finally front-and-center.

We can therefore start to appreciate the life-long urge to do something about this mismatch, and to resolve the tension it creates.  The 9th fetter can also be seen as the underlying tendency to compensate (another translation of the Pāli term uddhacca) for that mismatch.  Having now abandoned the notion that anything exists that could possibly have the qualities such as permanence that we seek, here we can finally start to explore whether those qualities are available in the first place.  Without the landing spot of a “me” that ostensibly has the qualities we are looking for, there can be a very definite sense of still casting about for those qualities – it’s like we miss the ability to fool ourselves that we or anything else is what we want or hope it is.

We also see that while we cannot find anything permanent, satisfying or substantial, we also cannot find their opposites.  Here, we realize that the abstract ideas that what is happening is characterized by impermanence, suffering and insubstantiality are also not true or even helpful. Rather, these were intended to be reminders that we couldn’t find what we were looking for all these years, rather than descriptors of “reality”.  These pairs of opposites are now seen to mutually define each other, rather than being able to stand alone as the way things really are: in other words, "impermanence" is every bit as delusory as "permanence".

To cling to the notion that what is happening is inherently impermanent, insubstantial or liable to suffering would therefore be the opposite extreme of the delusions we started with, and in the case of suffering would call into question whether or not the end of suffering is a legitimate purpose or goal of the Buddhist path.  Though these three pairs of concepts can be quite helpful up to a certain point, as a well-known Buddhist simile advises us, they can and must be set aside as helpful rafts that helped us to travel to the opposite shore, rather than encumbrances we strap to our backs and continue to carry around.

Breaking this fetter is not about rooting out those three unrealistic beliefs: that comes next.  Rather, it is coming to accept that what we seek isn’t available, by which the sense of restlessness and the urge to try and compensate for not finding what we cannot find, can finally stop.  We are not done with the path, but we are done with trying to change, create or avoid anything.  The belief that falls away here is that trying to find or create a different version of what is happening now will somehow do any good.  It’s not that we resign ourselves to unrealistic beliefs such as permanence or always feeling good: we just aren’t compelled to do anything about them any longer when we see they aren't available or true.

The shifts to this point may have been quite obvious, such as when the belief in a separate ‘self’ evaporated.  However, when the 9th fetter falls away, it can be very subtle, and it may be that you simply realize one day that that restless urge to compensate is no longer there.  While this shift might be subtle and even imperceptible while it is happening, the “result” can nevertheless be quite joyful, peaceful and relaxing, because you have finally stopped trying to resist what is happening, and stopped trying to change the world to your own liking.

As with every shift to this point, it’s not that something “wrong” has been destroyed or broken, nor has anything “right” been cultivated or adopted to take anything else’s place.  Rather, it’s more a letting go of the notion that anything is right or wrong, at least in terms of compelling us to cling to what is happening now or compulsively seek some other version of it.  It’s thus not a matter of resigning ourselves to what is happening in some passive sort of way: if anything, awakening can help us to be more effective in life, including in helping those around us.

Looking at the other traditional path descriptions, the ninth Mahayana bhumi can be translated as “the good mind”, where one is able to find their voice and be of service to others because they finally have an experiential understanding of what they have been ignoring throughout their lives.  They can speak from experience, and even though unrealistic beliefs are still in place, they now know what that has been all about and how it manifests in life.  The Buddhist tradition suggests that it is really only those who have reached the ninth bhumi who are truly in a position to teach others, because they have not just realized for themselves that there is no “me” whatsoever, but they also know why they had always ignored this fact, thus can help others to realize the same for themselves.

This stage also correlates to the beginning of the Mahamudra yoga of “no meditation”.  Here, one starts to appreciate that once all false beliefs have evaporated, so too will the need for meditation as a tool for getting rid of those beliefs, even though meditation will still be quite available as a quiet abiding.
​
​Links